These are summary statistics for bicycle-involved crashes from the PennDOT crash data. Our presentations of crash data are in beta and CentreBike presents this data for informational purposes only.

One of the ways we target our cycling advocacy is by reviewing crash data. We’ve created some data tools using PennDOT’s Crash Data. We currently have all the bicycle related crash data from 1997 to 2017 for all of Centre County.

Where applicable, the map or charts show the latest year for which we have information. You can select a different year, or all years. If you choose “All”, please be patient — it takes a while to retrieve the data. 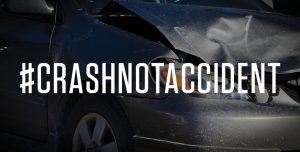 Also, click on the picture at right to read an article from Bicycling magazine on one simple thing we as advocates are doing to drive the discussion about a good number of cycling crashes. In many cases the motorists are not charged because the responding officer(s) considered the crash an “accident”. Rarely is that the case. Sometimes it is the cyclist’s fault, and as a cyclist, you do bear the same responsibilities as vehicles to obey all traffic laws. Disproportionately, though, motorists are often not charged, even when the evidence says otherwise, and those charged are often not convicted.

If you find yourself involved in a crash and it was definitely the motorist’s fault and they weren’t charged, you can make a request to the responding officer and his/her supervisor (and keep going higher if necessary) to have the motorist charged. Why is that important? Since PA is a no-fault state, it can matter whether your insurance or the motorist’s insurance covers the cost of your medical care. Also, if you chose to sue, a charge against the motorist goes a long way in helping your case. A member of the Lebanon Valley Bicycling Coalition, who is a rider and also an attorney, wrote a great article about what to do before and after a crash. Another “what to do” resource can be found on Bicycling magazine. Being familar with the vehicle code and how it applies to bicycles can also help you make your point. Check out resource pages for links to the PA Vehicle Code and Bicycling Driver’s Manual