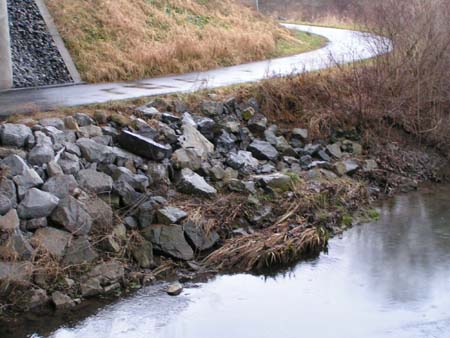 An emergency closure of the College Township Bikeway from the College Ave. tunnel to the quonset hut at Millbrook Marsh took effect December 22nd to allow PennDOT to access a sinkhole which had opened between the path and Slab Cabin Run next to the 322 bypass bridge over Puddintown Road. A second sinkhole had appeared on the opposite side of the creek next to Puddintown Road.

Work began at noon that day. College Township Supervisor, Adam Brumbaugh, expressed concern that enlargement of the sinkhole would threaten the path and the bridge. If the creek entered the hole, Brumbaugh said, groundwater supplying municipal water wells could be contaminated. Heavy equipment needed for the project had to travel down the path to the site and damaged the pavement. This necessitated repaving after the repair was completed.

The closure lasted several weeks, but cold weather delayed repaving until the spring.

Acting at the request of CRBC and College and Harris Townships, PennDOT has re-paved the damaged shoulders of Warner Dr. where cyclist Bohdan Kulakowski was killed (note ghostbike memorial in photo). “No Parking” signs have also been erected to eliminate use of the shoulders for tractor-trailer parking. CRBC is requesting that the shoulders be designated and marked as bike lanes. Creation of the Bohdan T. Kulakowski Memorial Bikeway is also under consideration. The bike path would connect the Pa. Military Museum, Oak Hall Park, Mt. Nittany Middle School, the College Township Bikeway, and the South Atherton bike path.