Penn State professor and avid bike commuter Bohdan T. Kulakowski was killed last March when he was hit by a van while riding home from his office on campus. The Second annual ride in his honor was held today. Participants rode from campus to the crash site with bike trailers filled with flowers to place on the ghostbike memorial.

Thanks to the officers of the State College Police Department who provided support and blocked traffic for the ride. 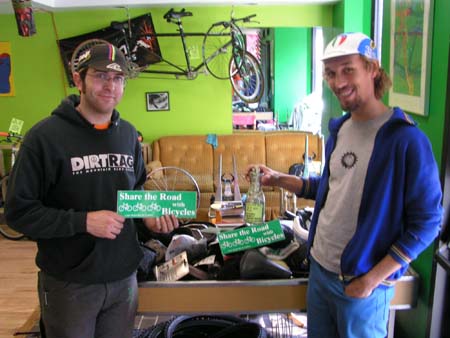 FreezeThaw Cycles on Calder Alley has raised $130 for CRBC by selling bike parts and CRBC “Share the Road with Bicycles” bumper stickers at their $1 bargain table. Thanks to Justin, Jordyn, and all the FreezeThaw employees who have helped.