South Sparks to get Bike Lane 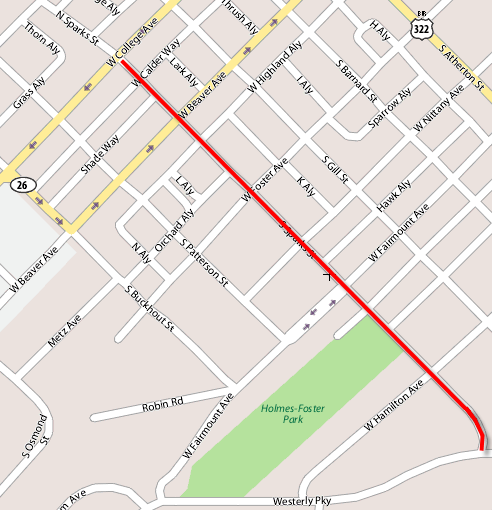 In a 4-3 decision, council decided to put a northbound Share-the-Road lane along South Sparks Street from West Campus to Westerly Parkway.

Between Westerly Parkway and Prospect Avenue — already a no-parking zone — the borough will designate a northbound bike climbing lane.

A hearing was held on April 6 about the proposal, where several community members voiced concern over elimination of parking spots.

Councilwoman Silvi Lawrence said she thinks the signs and street markings will “pollute the street.”

Why I Don’t Bike To Work 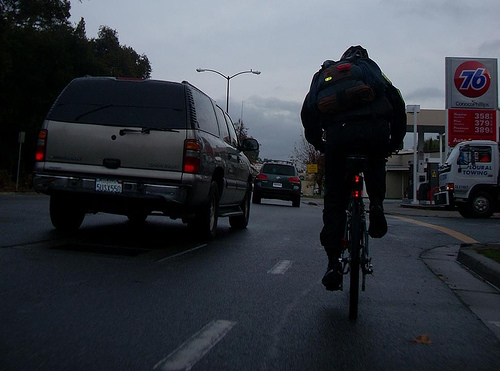 There are many fine men and women who could speak to why you should commute via bicycle. They are out there every day proving that we can all contribute to our own health and the health of the planet. I am not one of those people.

I drive to and from work every single day, regardless of weather, time, and, surprisingly, the number of bikes I own. This makes me unfit to convince you to give up your car and bike to work since I have clearly been unable to convince myself to do the same. I used to think my reasons for not biking were sound, but I’ve not spent much time examining them. So, why don’t I bike to work?

Bike commuting is dangerous. Not all drivers are inattentive, but there are enough that I think twice about sharing the road with them. Speed limits are disregarded, shoulders are drift and passing zones, and bike lanes are used to cut corners to trim milliseconds of travel time. Why pit myself against all that on an unseen and unprotected conveyance? But there are cyclists out there surviving every day by sticking to lower traffic routes, avoiding rush hours, using off-street paths, increasing their visibility, and maintaining their awareness of the traffic around them. Surely, I could employ some of these tactics and arrive safely at my destination.

Bike commuting leaves me stranded in an emergency. This has always been my “can’t touch this” excuse as my son is mostly confined to a wheelchair and requires constant medical attention. But how valid is this excuse? Seeing as my spouse drives our only wheelchair accessible vehicle, not very. If she is unable to respond, I can call on friends, family, and taxis for rapid transport.

Bike commuting is inconvenient. Commuting is more than the shortest distance between two points. It’s errands, picking up dinner, or shuttling the kids. How do I handle life’s daily needs on two wheels? Die hard cyclists will tell you that a rack and panniers are your best friend when it comes to running errands, but if, like me, you face a longer commute, the answer is simple: don’t run errands on bike days. There is no morally mandated requirement that we must bike to work every single day. We can still reap many of the benefits of bike commuting by being selective about the days we ride. If you know that you have two days per week that require a car, drive those two days and bike the rest. Look for ways to consolidate your errands to free up time for biking.

Bike commuting makes me sweat too much. While a common argument, this one actually doesn’t apply to me. My employer has showers on site, so I have no reason to fear exertion. All I need do is pack a bag with my clothes and some toiletries. Even a quick refreshing upon arrival would be sufficient in most cases to go through the day without causing olfactory offense.

Bike commuting takes too long. My commute by car is approximately 25 minutes each way and does not begin until after I walk my son to school. I don’t arrive home until 6:30 PM. Bike commuting would see me arriving home at 8:30 PM, which is incompatible with ever seeing my children awake again. Not a problem with a mere 10 minute commute, but in my case, compromise becomes the solution. If my spouse took our son to school a few days, I could roll out of bed and onto the bike, arriving at work earlier than normal and avoiding traffic in the process. Since I wouldn’t have a car for lunch trips (i.e., errands), I could work through lunch and be able to leave earlier as well.

Bike commuting and inclement weather don’t mix. Saving the planet is quite noble, but if the planet decides to strike back at me with an unexpected thunderstorm in the evening, I’m not likely to let myself get caught in the rain again on an uncovered bike. A little planning can help alleviate this problem. By storing some basic rain gear at the office, I can always be prepared should the weather turn sour. If the weather looked downright dangerous, I can call upon some of those aforementioned friends and family to give me a lift home.

Bike commuting is tiring. There is every chance that I will bike to work and, at the end of the day, decide that I simply can’t endure the ride home. Many commuters claim to be invigorated by their commute, but I remain skeptical. That’s why we have CATA. For a modest fare, they will take me and my bike back home.

Those were my reasons for not biking to work. Maybe some of them were your reasons, too. Take some time and think about why you don’t bike to work, and you might find that every problem has a solution. But have I convinced myself? Enough so that I will be experiencing my first bike commute as part of the Centre Region Bicycle Coalition’s Bike To Work Week events. With any luck, I will not be struck by a vehicle on a rainy day in which time is of the essence due to an unforeseen family emergency that requires me to run an errand. But even that possibility will not stop me from trying.

Join CRBC, CATA, and a host of Penn State environmental and health organizations to find out about bicycling and other alternative transportation initiatives in the State College area.

When: 8am – 5pm
Where: Corner of College and Allen

Food and fun for the entire family. Bob Swaim, the bike guy, will be on hand with his extensive collection of unusual bicycles. Local bicycle shops will be here to help with your cycling needs. There will be information about bicycle commuting, health, relaxation, and much more.

Kids of all ages are invited to participate in the bike rodeo put on by the State College bike police. Freeze Thaw Cycles will provide bike maintenance support for the event. Come with your child and his/her bike to learn about bike safety and proper bike fit.

4 Township and a Boro Ride

Join CRBC as we explore State College on designated bike paths and bike routes in the area. While the entire ride will be about 23 miles, join us for as much or as little of the ride as suits your abilities. We will ride at a leisurely pace with seasoned cyclists to ensure that no one is left behind. We will ride to each of the townships and the borough that comprises State College. Municipal officials will be on hand to receive and possibly ride with the riders at each municipal office or designated meeting spot. Come out and be part of the inaugural Ride!

When: 1:30pm – 4:30pm
Where: Start at State College municipal building

We’re sorry, but the winery ride is cancelled due to conflicting events. If you’d like to be notified when the ride is rescheduled, please contact Paul Rito at paulrito at comcast . net or 814-231-8405.

We’re sorry, but due to forecast rain, the ride
is cancelled.
We will try to reschedule the ride later in the year. Watch the CRBC website for details.

While riding home from his office at PSU in 2006, Dr. Kulakowski was struck and killed by a van whose operator, though legally blind for 20 years, had continued to drive.

“Have One for the Trails” Tony’s Big Easy Happy Hour

Bike with the family to Tudek park for an outdoor showing of Wall-E. Rain date is Saturday, May 9.

Several experienced cyclists have volunteered their time to guide new commuters during Bike To Work Week. Areas, contacts, and availability are listed below:

We also have Ride Guides specifically for the commute home from campus:

Please contact your Ride Guide mentor to arrange your commute!

For general questions, please contact Kate Marshall-Chase via e-mail at katemc1@yahoo.com or via phone at 237-6316.

So mark you calendars, because in May we’re getting you out of your car and back on your bike!

Help spread the word about Bike To Work Week by downloading and distributing the BTWW flyer (PDF, 175KB).

Why I Don’t Bike To Work

Thanks to the following organizations for their participation