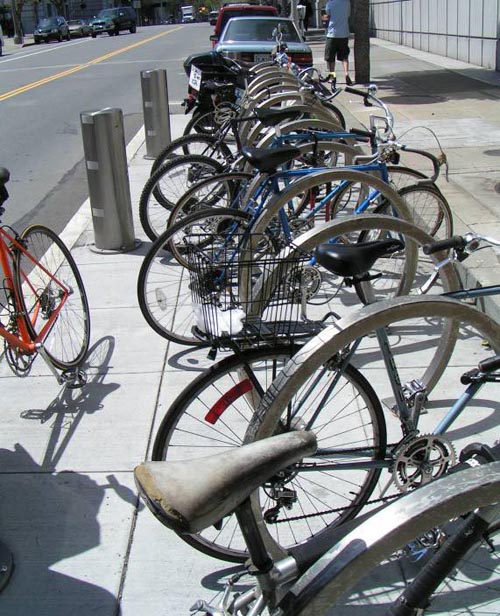 On July 21, the State College Borough Council approved conversion of one parking space in the 100 block of Allen Street to bicycle parking. This type of conversion is in use in other urban areas. For the conversion to succeed, the bike parking must be in a location where demand for parking is high. It must be convenient for cyclists to access and use, and must include structural elements to protect the cyclist and the parked bikes from passing motor vehicle traffic. Simply placing a bike rack in an empty parking space is not adequate for bike parking needs. Demand for bike parking is high on South Allen Street.

Initially, the conversion will be seasonal, running only from April 1 to November 15.

Below are examples of successful conversions of parking spaces to bicycle parking. U. S. Transportation Secretary Mary Peters has responded to a complaint by CRBC about her statement on the PBS Newshour that bike paths and trails are not transportation facilities.

Here is her reply:

Thank you for your e-mail about the importance of bicycling and walking as a form of
transportation. I share your interest in a safe, efficient mullimodal transportation system.

Your e-mail discussed comments I made during a recent interview regarding the importance
of effectively prioritizing major transportation spending decisions. These comments were in
no way intended as an indictment of bicycle and pedestrian investments broadly. Rather, they
were part of a much larger critique of the processes by which investment decisions are
increasingly being made at the Federal level. Too often, political influence and power arc
guiding transportation spending priorities, instead of merit, competition, data, and analysis.

The U.S. Department of Transportation believes that bicyclists and pedestrians are legitimate
and welcome users of our Nation’s transportation system. They are a healthy part of the
solution to congestion in our urban areas. We also believe that States, metropolitan planning
organizations, and transit agencies are in the best position to understand the unique needs of
their own communities, which is why we have continued to strongly support broad eligibility
under the Federal-aid program for a diverse mix of transportation investments, including
bicycle and pedestrian transportation facilities.

Programs that improve safety for bicyclists and pedestrians arc also eligible for Federal safety
dollars. Although the number of bicyclist and pedestrian injuries and fatalities has dropped by
10 percent since 1994, fatalities have increased in the last 2 years, and this is not acceptable.

Thank you again for voicing your opinion. I hope to continue to work with bicycling and
pedestrian advocates as we face the challenges of meeting our country’s changing
transportation needs.

The Democratic National Convention to be held this month in Denver has been proclaimed the “Greenest Convention in History” by its organizing committee. A “hybrids only” parking lot has been set up at the site, and the committee has announced plans to buy carbon credits to offset the convention’s carbon footprint. The committee has partnered with Humana and the Bikes Belong Coalition to provide 1000 free bikes for use by attendees. Your hybrid will be valet parked, but don’t try to ride one of those free bikes to the convention. For “security reasons” bicycles will be banned from the Pepsi Center convention venue and from Invesco Field where Barack Obama will deliver his acceptance speech, according to a report from the Colorado Independent.

Perhaps this should not be surprising considering the “No Bikes Zone”declared by the New York Police Department for a large area surrounding Madison Square Garden during the 2004 Republican National Convention. Over 250 cyclists were arrested, and hundreds of legally parked bikes were confiscated by the NYPD, with some held as “evidence” for over nine months. Hundreds of lawsuits are making their way through the courts resulting from NYPD’s violations of cyclists’ rights as well as perjury and falsification of evidence by police officers. Last month, an NYPD officer was caught on film slamming a cyclist to the ground without provocation.

What is so threatening about bicycles that they are being banned and confiscated while riders are assaulted by police? Will we see a repeat of these violations of basic rights at this year’s conventions?