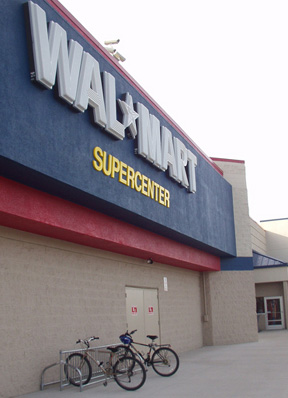 <div class="photo-inset-right"></div> <p>Congratulations and thanks to CRBC member Terri Lukens-Gable who has succeeded in her single-handed effort to have a bike rack placed at the Benner Pike Wal-Mart. Here's her account of the effort:</p>

Congratulations and thanks to CRBC member Terri Lukens-Gable who has succeeded in her single-handed effort to have a bike rack placed at the Benner Pike Wal-Mart. Here’s her account of the effort:

“After 6 months of back and forth with the Benner Pike WalMart and their corporate office, they now have a bike rack again. The history of this started last year when they started construction to become a ‘Super Center.’ The bicycle rack that they had understandably disappeared during construction.

After the grand re-opening in September 2005, it was not replaced.

I didn’t make a fuss until after the beginning of the new year and in February I was a bit too eagerly told that they ‘would not be replacing the bike rack.’ Discouraged, I dropped the subject until I read about your victory in clearing the Wegman’s bike rack area. Mid May, I called the WalMart corporate office to explain that the decision of their Benner Pike Super Center to not replace it’s bike rack was ‘unacceptable.’ Within 2 days, I received information that a new bike rack had been ordered.

Last Friday, June 16, a rack with over 25 ports for bicycles was installed in the very front of the store. I went to check it out and photograph it that evening and met a man who was unlocking his bicycle from one of the benches. I told him about the new bike rack which he had not noticed and he brought his bike down to be photographed along with mine. He seemed very pleased and I hope others will be too.

Thanks for your encouragement and support!
Terri”